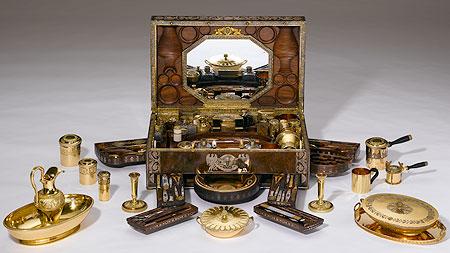 The set was a present from Napoleon, "Emperor of the French", to his second wife, Marie Louise of Austria, the eldest daughter of Emperor Franz I of Austria.

The precious case has a number of cleverly disguised secret compartments and bears the signature of Biennais, the most famous goldsmith of the day, under the key-plate.

It contains more than 120 items, made from silver-gilt, gold, mother-of-pearl, tortoiseshell, ivory and ebony, and including a dinner service for two, a toiletry set, writing and sewing implements, a measuring rod, a screwdriver and even dentist's instruments.