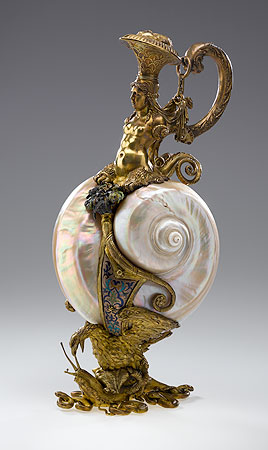 The charm of such typically Mannerist vessels lies in the contrast between the soft glow of mother-of-pearl and the gleam of shining gold, between a natural object and the results of human skill.

The realism of this piece is characteristic of Wenzel Jamnitzer, who often cast objects directly from nature, as with the shells here. Born in Vienna in 1508, he later moved to Nuremberg and maintained his position as the leading German goldsmith and ornamental engraver of his age until his death in 1585.